Blissfully attached to
Dear Daniel
ever since
9 December 2012. 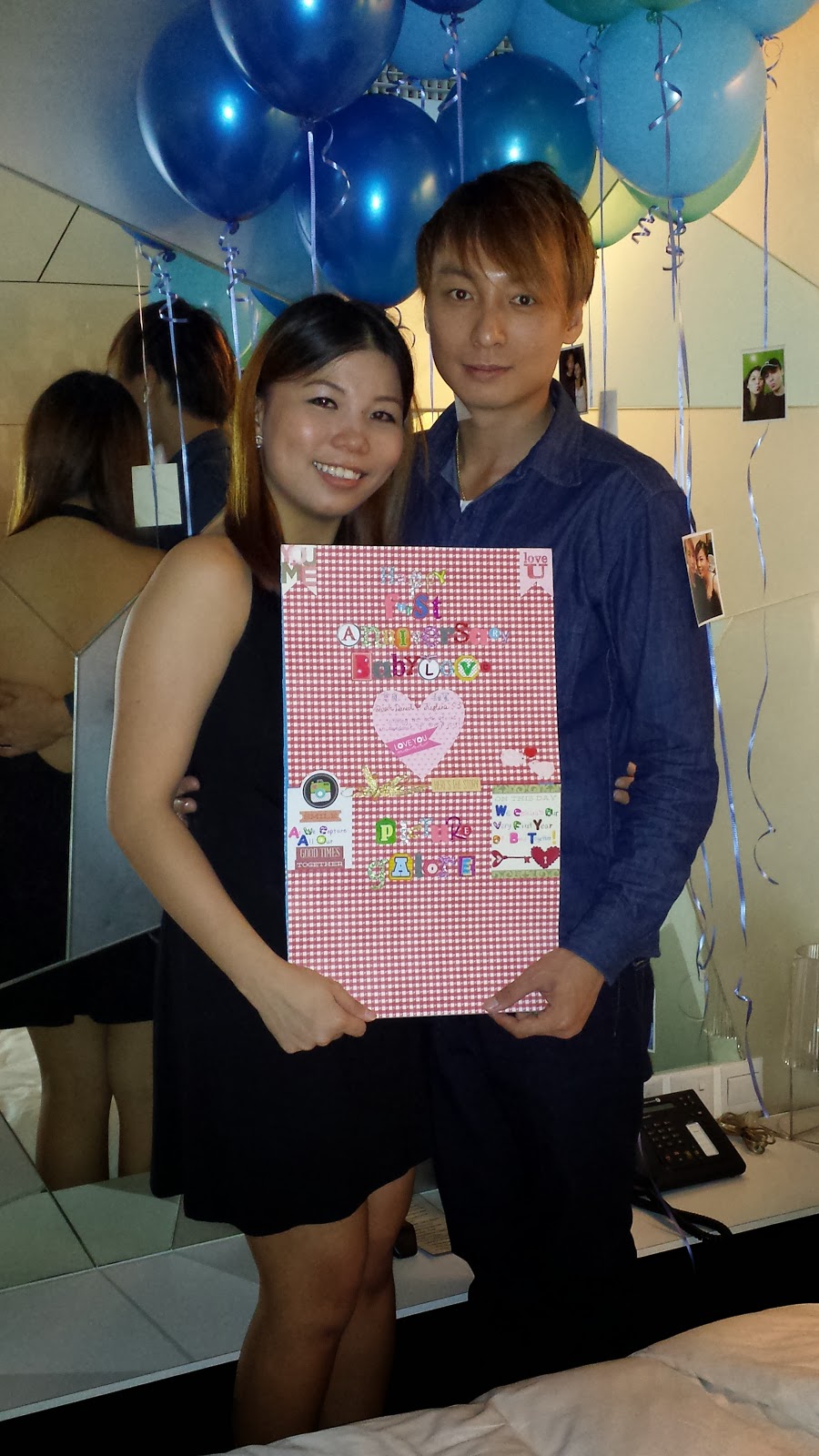 Our anniversary falls on every 9 December and in 2013, it happened to be a Monday. I decided to celebrate during the weekend (7 December 2013-8 December 2013). I started planning this surprise two to three months earlier, which was during late September. I researched on many, many hotels for the 2D1N staycation and finally decided on Wanderlust Hotel as it was quite highly-raved. Furthermore, the themed rooms looked quite fun & interesting judging from the reviews online. Initially, I had wanted to book the Space-themed room. However, it was fully booked. Therefore, I chose the Bling-themed room.

I did a gigantic hand-made card and it took me more than a month to complete. I ordered thirty latex helium balloons, from Party Wholesale Centre in a mixture of different shades of blue. Why did I order thirty & choose the colour blue? Cos he was turning thirty on 12 December 2013, a few days after our anniversary & blue is his favourite colour! And with the help of one of the lawyers (cos' her mom's shop is just next to it and she's a regular), I ordered a fruit tart from Ma Maison Cafe @ Millenia Walk. It was of chocolate flavour, garnished with raspberries and strawberries and specially made for two. I told her I wanted it to be of heart shape and wanted the wordings to be 'Happy First Anniversary & Happy Blessed Birthday, Babylove'. However, she said I could only have four words on the tart due to the limited space. Hence, I settled on 'Happy First Anniversary, Babylove!'

I had a hard time deciding on what to have for dinner as he's a very fussy eater. I wanted perfection for the whole surprise and hence, I came up with an excellent idea! I told him I received an invitation for a food-tasting event on 7 December 2013 via email and it would be free of charge if I were to go alone. If I'd bring a partner along, it would be 1-for-1. I even told him there was a list of restaurants for us to choose from and we could discuss over it as they would be sending me their menus. Therefore, I printed fifty over different types of menus for him to choose! The menus ranged from Asian cuisine, Italian cuisine, Japanese cuisine, fine-dining, seafood feasts, buffets, steaks and many more. Upon presenting the pile of menus that I have printed, boyfriend asked in doubt,  'how can this be a 1-for-1 deal when you can get to choose from so many different types of cuisines?' I replied, lying, 'oh, it is just another advertising gimmick. Anyway, we still have to pay, even though it is at 50%, right?' Then he went, 'oh, I see.' I was so afraid that I would give myself away cos' I would never wanna lie to him. However, for this surprise to work, I was left with no choice. After much discussion, boyfriend chose & Todai Restaurant.

I thought I had settled everything and then I realised I forgot all about the hotel! I had to think of a way to bring him to the venue of the surprise after the dinner. So, I told him that we had to pay to the restaurant in full first, then we would get the receipt and collect the reimbursement from the 'organiser' aftermath. Boyfriend got suspicious, not about me, but about the 'organiser'. He was afraid I might get cheated into paying a whole sum instead of the promised half amount. Therefore, he told me to speak to the 'organiser' and get the 'organiser' to send me an email to state every single thing clearly in black and white. At that point of time, I was feeling really guilty as the 'organiser' had never existed and I made up the whole story just for the surprise. Anyhow, I drafted the email and got my colleague to send it to me. After showing it to boyfriend, he felt more at ease.

This summed up the preparation and planning part of the surprise of our first anniversary. The upcoming post will be on the actual day of the surprise! Stay tuned~

This entry is more than two months late! Hehe~ Apologies for the long hiatus! Anyway, boyfriend took part in an online contest and won a pair of tickets to Sentosa Spooktacular on Halloween Day! Actually, the winners were already chosen. However, one of them couldn't make it. Therefore, they had to re-pick another winner and lucky boyfriend got it!!! It was just one day before Halloween when they called to inform boyfriend, and we had to travel all the way down to Ang Mo Kio industrial park to collect the tickets! We had wanted to forgo the tickets, as they called us at close to 2pm to inform us and we had to collect it by 5pm on the very day! Moreover, we needed to head to HDB Hub to sign the lease agreement at 4pm on the same day! In the end, we decided to collect the tickets as we have never been to any Halloween night and we thought it could be quite an exciting and memorable one for us!

On the actual day of Halloween, boyfriend drove over to pick me up at Vivo City as I went to buy dinner at Texas Chicken after knocking off. After filling our tummies, we started our adventure! We set off at Beach Station by taking the creatively-decorated tram to our destination - Spooktacular Sentosa!

Initially, we thought there were not a lot of people as it was a Thursday. However, we were wrong! It was flooded with super loads of people as it was the actual day~ Goodness! There were too many people that we had to be let in group by group. I guessed it was in a group of twenty by each time.

We watched a short clip at the start which briefly summed up that there would be five different stations for the whole adventure. The five movies shown above would be the stations of the adventure that we would be going to. Without further ado, I shall let the pictures do the talking!

It was such an eye-opener to see so many people dressing up just for this day! Not only the staff who were working for the event, but also, the people who went for the event! Some of their make-up and costumes even looked like those seen on television dramas! I got scared by quite a number of them several times throughout the whole event. Even my dear boyfriend got scared by the staff once! Hahaha~ Overall, it was an awesome night for us! We started at about half past eight and by the time we completed four out of five stations, it was already half past midnight! The waiting time for the first station was forty-five minutes, the second & third station were almost one and a half hour each and though the waiting time for the fourth station was just less than five minutes, we didn't manage to complete the last station as there were almost hundred people in the line!!! No joke, man~ Our legs were all sore and jelly from standing all the way at the queue as there were no seats. We were sweating all over even though it was thoughtful of them to install electric fans all over the place. Anyhow, no regrets attending the event since the tickets were complimentary ;-D